Objects old, vintage, hand made or upcyled, and old techniques with a modern twist

A friend has recently left work and gone on maternity leave, expecting her first baby in a few weeks time. As she doesn’t want to know the gender of the baby in advance, I had the challenge of making a present that would suit either a girl or a boy.

I enjoy knitting baby boots as they look great, and are such a (relatively) quick project, and I thought that cream and pale green wouldn’t be a gender-specific colour scheme. I also thought that this colour combination has a nice vintage vibe to it. As I didn’t want the mother to go without a present (after all, she will be the one doing all of the hard work!), I made her a flower brooch from some of the same yarn.

The boots were knitted, but the flower brooch and the cream frill on the boots were crocheted. As the boots are sized for a new born baby not much yarn is required (and even less is needed to make the brooch), so this is a good stash-buster project!

I hope the present is to their taste, and I would love to know what you think of this project- do you think the boots are suitable for both girls and boys?

I’ve finished a few craft projects this week, and am waiting for the weekend so that I can take some pictures to share them with you. I have been working late, so the light hasn’t been good enough for photographs by the time I get home in the evenings.

In the meantime I wanted to post these photographs that I took up on Dartmoor last weekend. It was a lovely, sunny day, with big, fluffy white clouds, and the colours were amazing. The heather and gorse are both flowering at the moment, so there were random explosions of purple and yellow all over the place. The more is lovely at this time of year, and it’s hard to imagine how bleak and wild it will look come winter-time.

The cute chap in the last photo was one of this year’s foals (there are herds of wild ponies living on the moors), and he was very inquisitive and friendly, gradually creeping closer and closer to get a good look at what I was up to!

I’ve spent a lot of time working in the garden with the dogs this summer, so I thought I’d gather a few dog-themed pictures together this week!

I’ve been putting a few bits and pieces together as a present for a friend who loves dressmaking, and thought the colours of the thread on these vintage wooden cotton reels was asking for a photo to be taken!

The group of wooden reels in this picture are all vintage Sylko: I collect Sylko reels (as I previously talked about I  this post), usually picking them up in charity shops or at car boot sales, but unusually haven’t come across any for several months- I must keep a sharper look out!

A few vintage bits and pieces, with a bit of a number theme this week.

Whilst playing around with some left over polymer clay, and having recently seen a collection of antique taxidermy, my strange brain thought ‘I know, why not try to make a form that looks like the skull of a mythical creature?’!

I thought that as I am familiar enough with horses to model it (I hope) reasonably accurately (assuming, of course, that if unicorns existed they would have the musculoskeletal system of a horse or course!), and that adding a horn would be easy, right? No, it was NOT an easy project!

Like a real skull, I modelled the lower jaw separately, and it was surprisingly difficult to make the two pieces fit accurately (and not too loosely), and to sit together correctly unaided. It was a challenge. And that ‘easy’ unicorn horn? Well, it wasn’t too difficult in comparison to forming the skull and jaw, but it turns out to be a little difficult to make a long and thin polymer clay form truly straight. In order to keep the horn straight whilst the clay was in the oven, I baked it separate from the ‘skull’, and attached it when hardened by drilling a corresponding hole in the forehead of the ‘skull’, and inserting the base of the horn.

The  finished piece is only 2.5 inches high (including the horn), which may have had some bearing on the difficulty of the project! As well as being quicker to make a smaller piece, I found it was also easier to position the features in relation to each other, and I think it looks a little less morbid being much smaller than life-sized.

I realise this project might not be to everyone’s taste, but hope that the finished piece looks intriguing and reasonably realistic- what do you think?

After making the lace storage hanger that I featured last weekend (see post here) I thought I’d feature some other funky crafted storage solutions to be found on the web.

The fabric storage idea pictured above is taking the use of clothes pegs to a whole new level! It looks like a great way to store smaller pieces of fabric as you can see what you’ve got, and it decorates the room! See the Muymolon blog for this and more ideas. 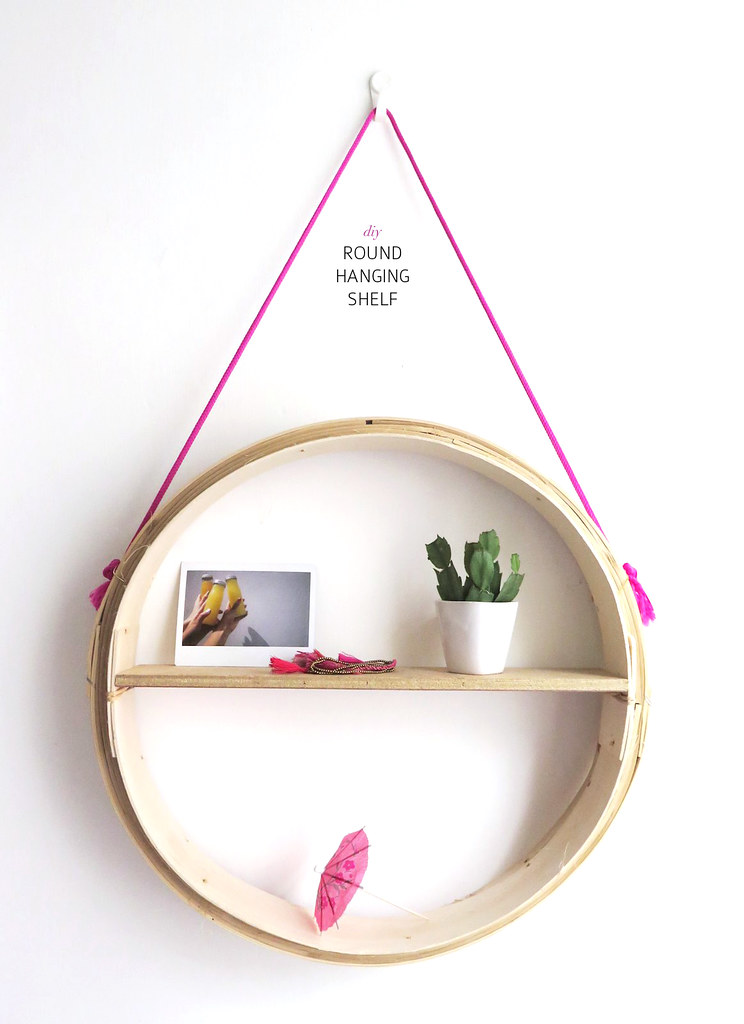 This super-cute (and easy to make!) circular shelf comes from the A Pair and a Spare blog, more pictures and full details of how to make it can be found here.

This storage pot is a very simple project, but the finished container is stylish and a useful – several of different sizes or colours would look really striking on a shelf! More storage ideas can be found on the Now at Home Mom blog.

How cool is this idea?! And you get to feel good as it involves a bit of recycling (the clear part is the bottom of a plastic bottle)! Click here to see the source of this crafty project, the Filth Wizardry blog (which also has lots of ideas for crafting with children).

Another fab way to store pieces of fabric! From Design Mom.

This is such a clever way of storing tubes of paint- as long as the lids have been put back on properly! The picture comed from the blog of artist Nicholas Egon Jainschigg.

For all the knitters, here is a simple way to keep your ball of wool  under control whilst knitting- a DIY yarn bowl! Taken from the Pocket Pause blog.

The vintage British birthday card (left of picture) is odd looking that it caught my eye, and I bought it for the princely sum of 10p! I find the bright colours and patterns of India very compelling, and have collected Indian miniature paintings for a while now (when I spot more affordable ones). The exceptionally detailed little elephant picture (bottom right- the crystals are not part of the picture!) was painted by Ramu Ramdev, a leading miniature artist in India. He paints amazingly detailed pictures, and the clothes and other textiles in his paintings are always beautifully coloured and patterned. Some of his work can be seen here, although the paintings are even more vibrant and accomplished when seen in real life!

I have quite a few lengths of vintage and antique lace lying around waiting to be used in sewing projects, and have been thinking for a while how I could store them without folding them first (they are very fiddly to press if creased). I had finally settled on hanging them over a wooden coat hanger, but decided I needed to come up with a more attractive storage solution, so – via a bit of upcycling –  here it is:

The hanger was very easy to make using:

First I carefully painted one side/the front of the clothes pegs. To get a nice, shiny and evenly-coloured finish I applied two coats of paint. Once the paint was completely dry (to avoid it being scratched during the assembly process) I used a hot glue gun to attach the pegs to the wooden part of the hanger.

Once I had attached the pegs I wound a piece of Washi tape around the hanger between each clothes peg, resulting in the purple stripes. The purple stripes could have been painted on, but I found this to be a more straight forward (and quicker!) way of producing the effect I wanted.

In order to produce a more visually cohesive look, I also applied purple Washi tape to the black rubberised jaws of the metal clips at either end of the hanger. The final step was to wind pink Washi tape around the hanger’s metal hook- this looks great and was quick to do, but I have since had to add a dab of glue to the end of the tape, as it decided that actually it didn’t want to stay stuck down!

Et voila, a storage solution that does the job, and looks nice in my studio space (no, it doesn’t normally live on the washing line in the garden!)…

This lovely bunch of vintage fabrics was my most recent car boot sale find; they are all washed and ironed, and just waiting for inspiration to strike!